For centuries the Silk Road was the thread that linked east and west. From as early as 200BC the silk merchants of Xi’an, China’s ancient capital, set off with their camel caravans on the long trek to distant Constantinople. They skirted the Gobi and the ferocious Taklamakan deserts, and crossed ‘the Roof of the World’, over the Pamirs and the Karakorams. This tour allows you to follow in their footsteps, to trace the legendary route taken by Marco Polo from west to east, with the inclusion of exotic places like Xiahe, and the dramatically-located fortified town of Jiayuguan. This outstanding expedition along the northern path of the Silk Road features Central Asia’s most historic, dramatic and splendid scenery. Conditions of travel have improved since the Italian’s day, but in some of the more remote places, where accommodation is comfortable but simple, a spirit of adventure is required. 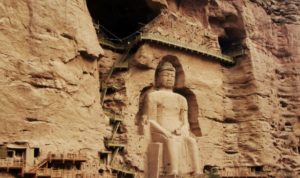 The Bingling Thousand Buddha Caves is located on the Small Jishi Hill, which is about 35 km  (22 miles) west of Yonjing County in Lanzhou city. Bingling means ‘ten thousand buddhas” in the Tibetan language and is constructed in the Jin Dynasty (265-316). The statues date from various dynastic eras and show the differing cultures, clothing and physical features of the worshipped gods.

The Labrang Monastery was established in 1907 by the first Jamyang Zhépa, Ngawang Tsondrum which is the Tibetan Buddism’s most important monastery town outside the Tibetan Autonomous Region. Labrang housed over 4000 monks at its peak, but now only has around 1500 monks. 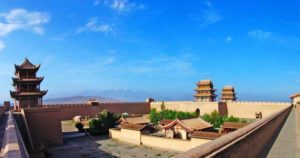 Jiayu Pass was built during the Ming Dynasty (1368-1644) under the supervision of Feng Sheng, a founding general of the Ming Dynasty. It was built with rammed earth, making yellow its dominant hue and helping the pass blend harmoniously with the surrounding desert. Jiatyu pass is not only a vital pass on the ancient silk road but also a western starting point of the Ming Great Wall. 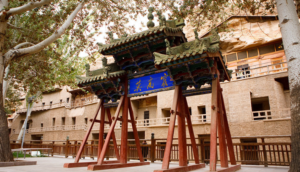 Mongao Grottoes also known as the Magao Caves or Caves of the Thousand Buddhas, form a system of 492 temples 25 km (16 miles) southeast of the center of Dunhuang. It is located at a religious and cultural crossroads on the Silk Road. The caves were dug out in AD 366 as places of the Buddhist meditation and worship. The Mogao Grottoes are famous for the Chinese Buddhist grottoes and, along with Longmen Grottoes and Yungang Grottoes, are one of the three famous ancient Buddhist sculptural sites of China. 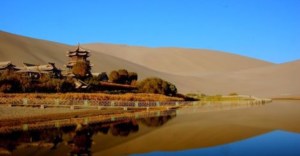 The Mingsha Sand Dune is located 5 kilometers south of Dunhuang city. It is famous for its flute-like sounds in the gale, therefore its name Mingsha as “Loud Sand” in English. The mountain is full of rolling braes forming such breathtaking scenery.

Check-in for the onward flight to Xian.

After an early breakfast transferred to the station for the train to Lanzhou. (BL-packed D)

A visit to the White Pagoda Hill Park with its 80ft high Buddha, and the Yellow River Mother Statue.

Begin the drive to Xiahe. Drive across grasslands and into a beautiful valley with an en-route visit to the Liujiaxia Reservoir on the Yellow River, and a ferry ride to Bingling Temple, known as the ‘Thousand Buddha caves’. (BLD)

Nick-named ‘Little Tibet’ Xiahe is the site of Labrang Monastery, the largest Tibetan Buddhist monastery outside of that province. Also visit the Sangke grasslands, where Tibetan nomadic farmers herd their yaks and visit a local family. (BLD)

Visit the town you may see monks heading towards the temple to complete their three-kilometer kora around the temple. A kora is a combination of pilgrimage & meditation and is an important feature of Tibetan Buddhism. (BL)

Take the fastet train to Jiayuguan. Relax the rest of the day before dinner. (BL-packed D)

See the Great Fortress and the overhanging Great Wall that guards the mountain pass, Jiayu ‘Excellent Valley Pass’. This is the narrowest section between two hills along the Hexi or Gansu Corridor – a string of oases along the northern edge of the Tibetan plateau. The Fort here guarded the entrance with one gate facing East and the other West. Continue the journey to Dunhuang, a strategic staging post on the Silk Road and once the western most point of China with the Great Wall extended to reach it and fortified to protect the city. This city is regarded as an ancient treasure house of Buddhist murals and sculpture with the Mogao Caves. (BD)

Tour the Mogao Caves, an art gallery in the desert. The caves are lined with Buddhist frescoes and sculpted figures, said to be the finest examples of Buddhist art in the world. Mixing Indian and Chinese styles, they are a remarkable record of Silk Road civilisation.

Among other caves to see and explore, stop to see the pavilion housing the Sleeping Buddha a 50 foot long horizontal, serenely reposed statue and certainly the most famous ‘The Library’ Cave that produced a huge treasure of documents – dating from 406 to 1002, a solid mass of 1000s of scrolls – they stood to a height of nearly 10 feet. (BL)

Depart from the hotel to begin a visit of Mingsha Mountain and Crescent Moon Lake, set in an amphitheatre of sand dunes. For the adventurous, the optional ascent of these sand ‘mountains’ by camel offers truly breathtaking vistas.

Before leaving Urumqi stop to visit the Xinjiang Museum.Depart the city for Turpan. The city is located within a depression some 80metres below sea level making the climate extremely dry but despite this the oasis town has been famous for its agriculture for centuries – particularly their melons and vineyards. The fertile oasis commanded the northern route and was an important stop for the rich caravans that passed through.

The city was conquered in the 14th Century by an heir to the Chaghatai Khanate loyal to Tamerlane the Great. The population was converted to Islam and then began the building of the mosques and minarets of today.

One of your first visits would be to the Emin Minaret, one of the finest buildings on the Silk Road begun in 1777. (BLD)

Visit the ruined cities of Jiaohe and Gaochang. Continue to the Bezeklik Caves whose walls are adorned with Buddhist frescoes, and the legendary Flaming Mountains, then see the underground Tombs of Astana. Evening performance of traditional folk music and dance. (BL)

Morning to explore Turpan before return drive to Urumqi. (BD)

Take a flight to Kashgar. Kashgar, a fabled city for its position on the Northern Silk Road, where the Taklamakan Desert meets the Tian Shan Mountains. (BLD)

Visit the Sunday bazaar. In this teeming market, you can buy anything from herbal medicines to carpets, from a cradle to a camel.

Take a typical Uygur style meal, then walk through the old town, a warren of twisting alleys and white-washed walls.

Visit the Tomb of Abakh Khoja, known as the ‘fragrant concubine’ and the vast Id Kah Mosque. (BL)

Drive to Lake Karakul. Take lunch outdoors, arranged at a vineyard. The meal served is quite simple matching the remote location. Return to Kashgar. (BLD)

Independent morning. Transfer to the airport for the flight to Beijing via Urumqi.

Met and transferred to the airport for flight back home. (B)

**All flight timings are subject to change without notice. In cases were we are aware of any major schedule changes made to your itinerary before your departure, we shall revise your arrangements and notify you accordingly. However, it is possible for changes to occur whilst you are in China. Our representatives will do all that is necessary to rectify the problems these changes may cause and will endeavour to seek your advice concerning new arrangements. However, at times there can be limited options and some decisions may have to taken without your consent to protect the well being of your tour in general**